Screech owls used to always nest in a cavity found in a large limb of my garden's biggest Red Oak.  Unfortunately, the limb eventually snapped and had to be completely removed.  But now my son has given me an owl house, so once again my evening garden visits will be accompanied by the soft trilling of nesting screech owls. 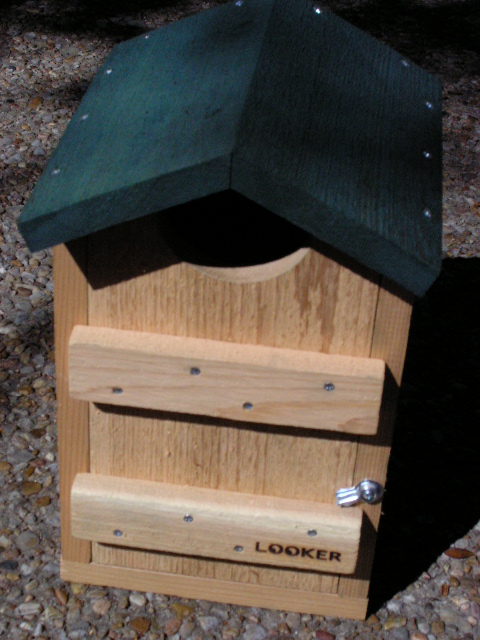 Though, instead of settling on it's rather generic appearance, I wanted it to naturally blend in with my trees - similar to my long, lost cavity. 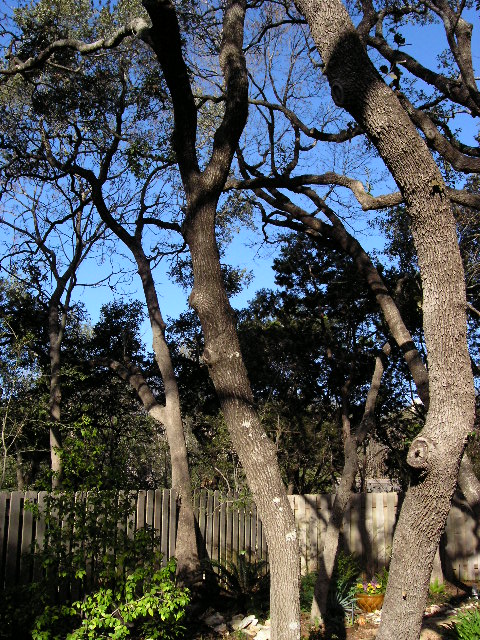 So I picked out a location on the main trunk of a Live Oak, and then studied the bark pattern and colors.  I wanted to paint the birdhouse in attempt to replicate that pattern so that it would essentially look like part of the tree. 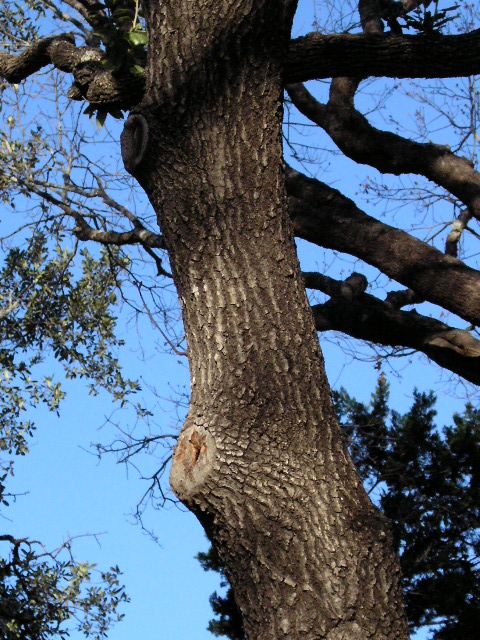 Since most of the owl house was unfinished wood, I decided to start by completely coating it with Krylon gray primer. 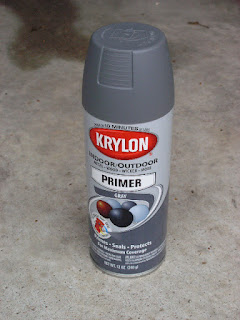 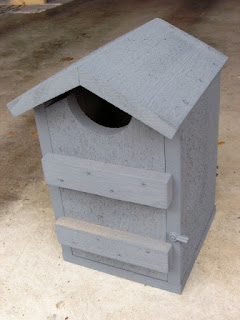 Next, I sprayed over the primer using Rust-oleum flat black camouflage paint.  After this dried, using a 3/8 inch round brush,  I created small blotches with Behr Premium Plus Fashion Gray (PPU18-15) flat paint in an attempt to replicate the bark pattern found on the tree.  The blotches tended to be too light and the overall paint job was a little too "precise", so to darken and dull the blotches/edges, I lightly and randomly sprayed over the house with Rust-oleum flat brown camouflage paint. 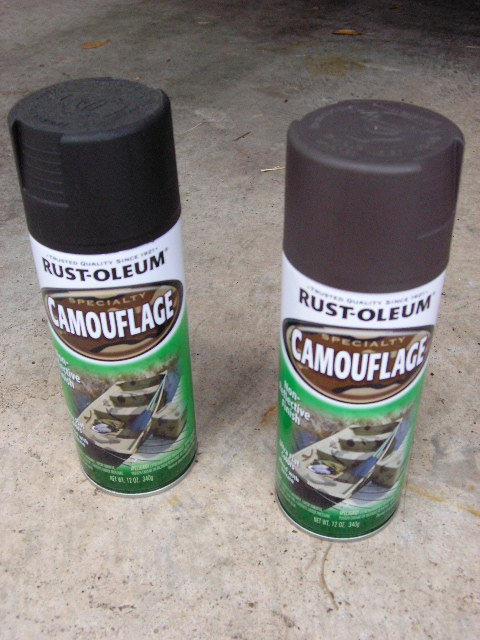 This worked extremely well and I was quite satisfied with its appearance, but when I held the owl house up near the bark, I discovered that I had made the blotches too large.  To fix this, using a 1/4 inch flat brush, I went back and painted additional stripes of Painter's Touch flat black paint to break up the blotches. 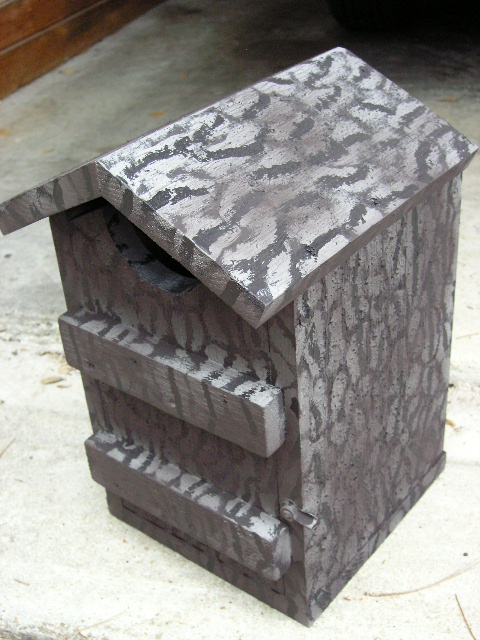 Unfortunately, the Painter's Touch flat black paint turned out to be shinier than my original, so I had to spray additional flat brown camouflage over the entire house.  This tended to make it somewhat darker than I really wanted, but starting completely over wasn't worth the effort.  To get it as high as I desired, I had to rent an extendable ladder from Home Depot - but was able to place it exactly where I had pictured it. 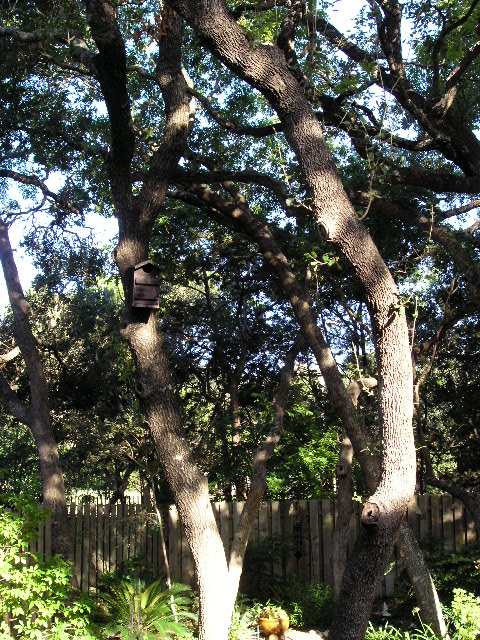 Now the owl house tends to disappear into the canopy unless you are actually looking for it.  Only time will tell whether the screech owls like it as much as I do. 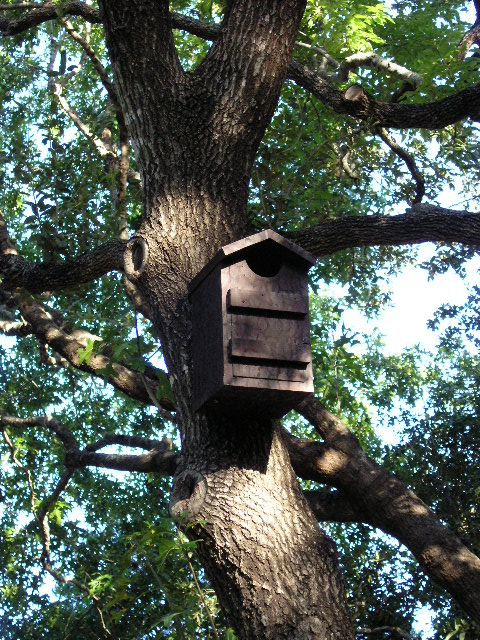 What I have learned: 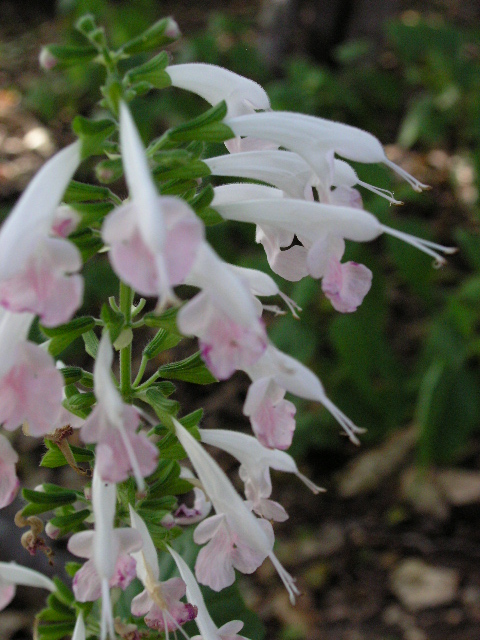 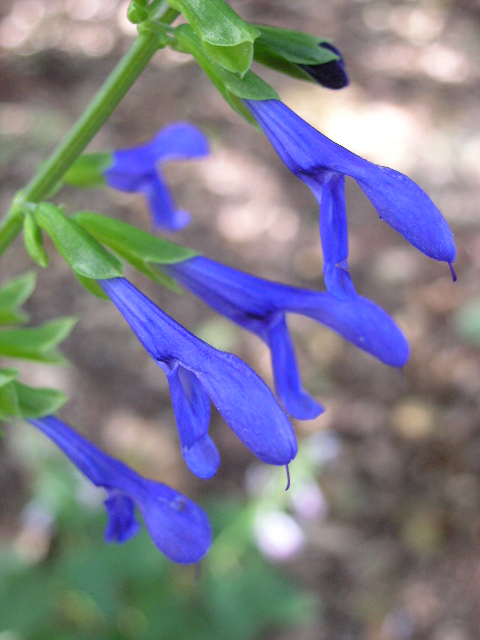 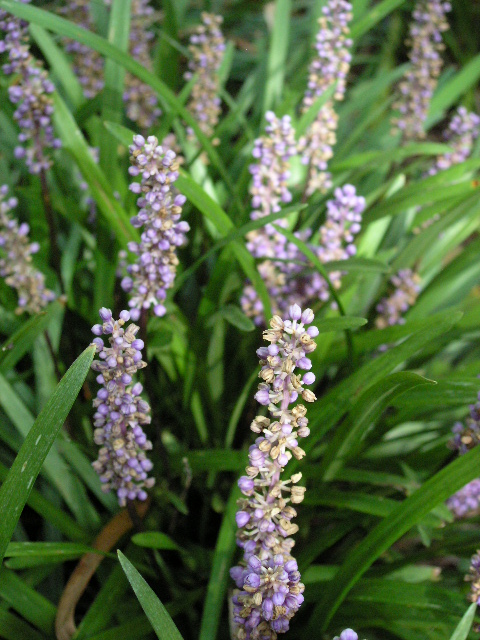 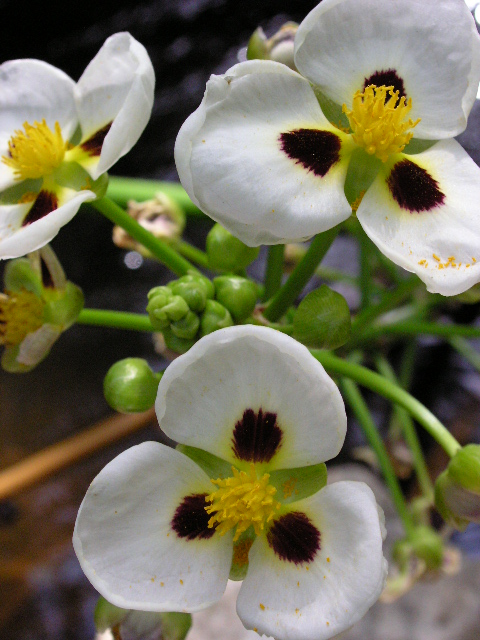 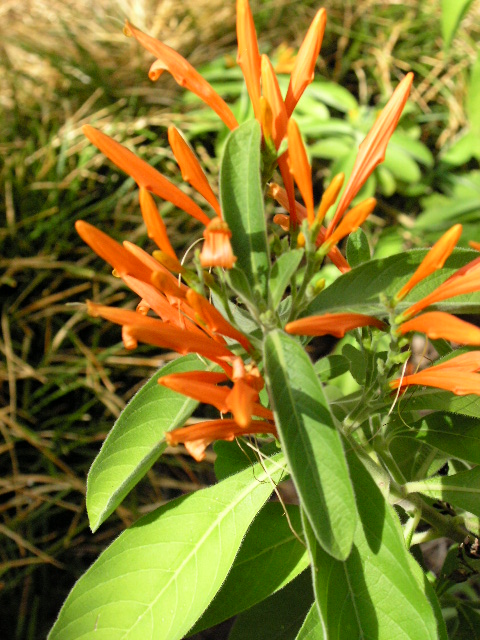 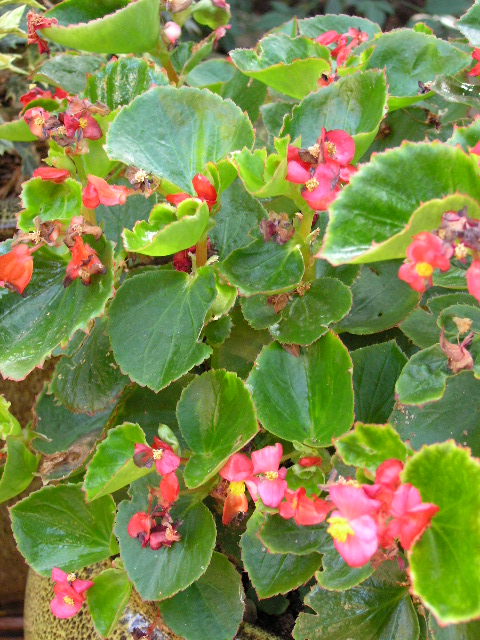 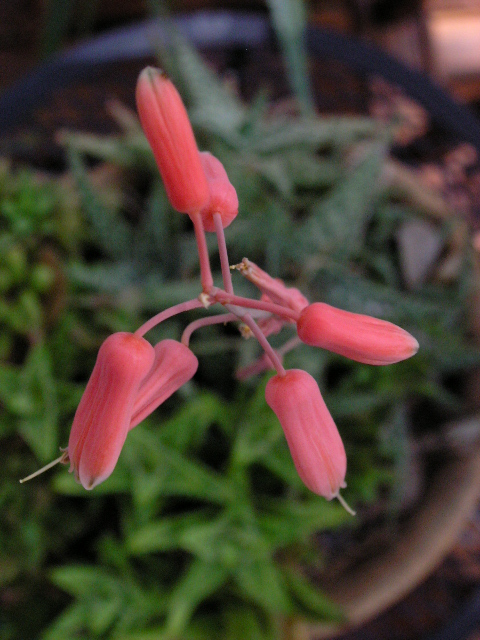 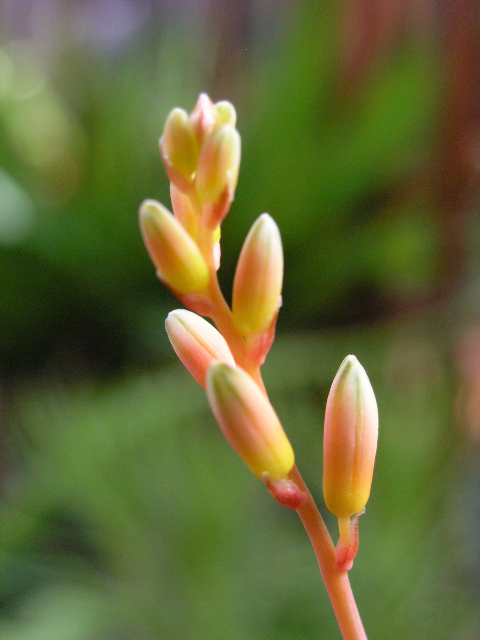 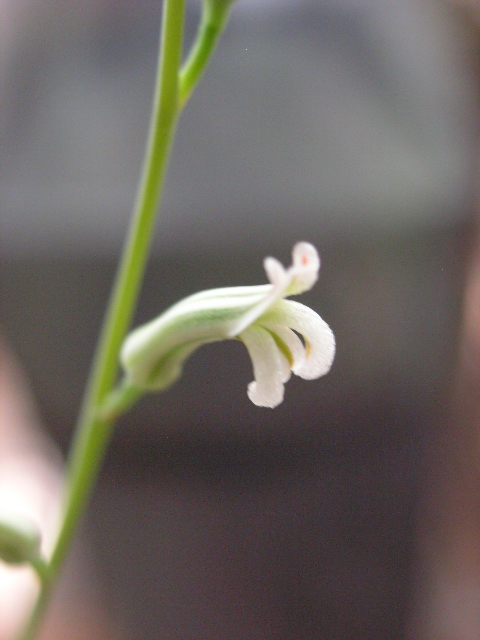 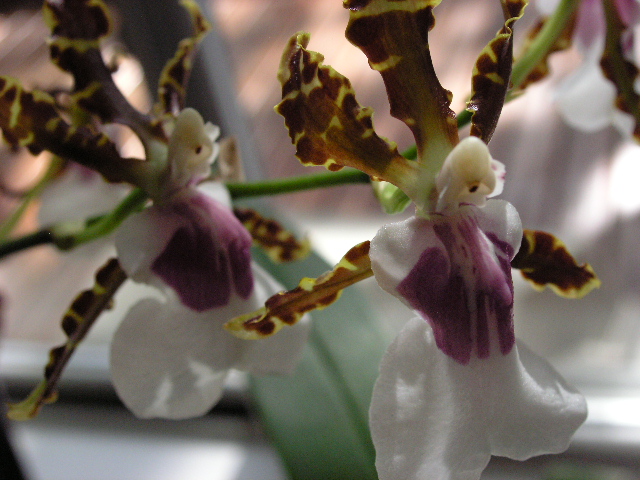 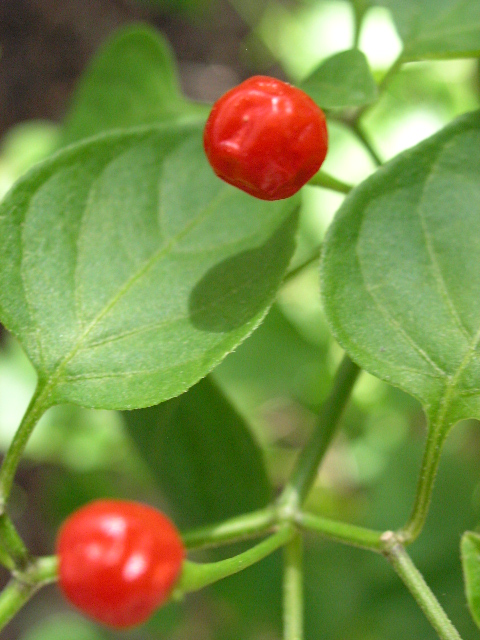 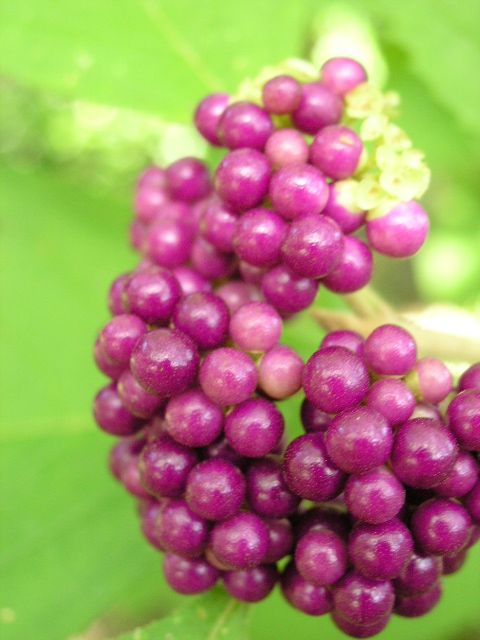 I've often wanted to try growing some Morning Glories, but have simply never gotten around to the attempt.  But recently I decided to try growing some up a metal obelisk that I had.  So, at it's base, I planted several seeds of the "Early Call Mix" back in late May.  They quickly sprouted and started growing up the metal frame. 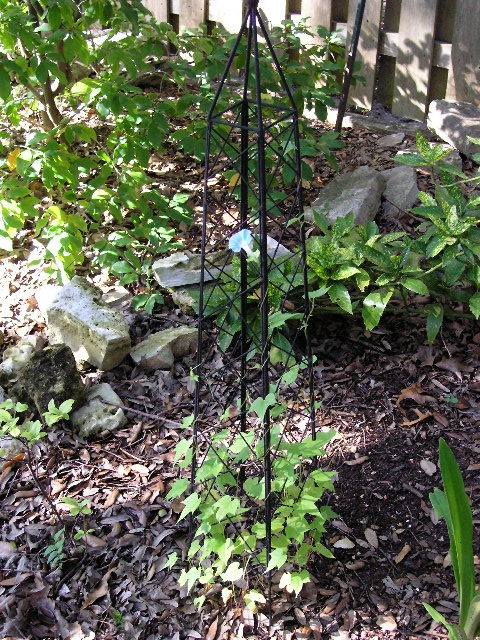 And finally, the first bloom has opened (and there are a few other unopened buds promising future blossoms).  There should eventually be several colors, but I find the pale blue of this first flower extremely attractive. 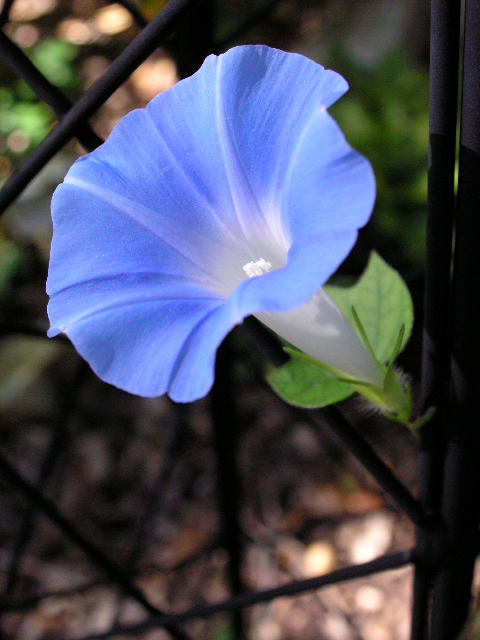