Spent most of the morning plant shopping, then returned home to digging holes, breaking up & removing rocks, adding sand & peat moss, and sticking plants into the ground.  Planted the following: three Marilyn's Choice Abutilon (two 4" plus a one gallon), two 4" Mexican Honeysuckle (Justicia spicigera), a Salvia splendens 'Van Houttei', three 4" Heartleaf Skullcap (Scutellaria ovata) and a Black Knight Butterfly Bush (Buddleia davidii 'Black Knight').  Kept finding myself sitting on the deck, listening to the birdsong, my eyes closed as I soaked in the sunshine.

With the filtered light coming through the trees, its always a gamble trying to get anything to actually produce flowers.  I sometimes get fooled at this time of the year into thinking I have more sunshine than I really do because the Red Oaks & Black Cherry Tree presently lack leaves.  I see all that sunshine making it to the ground and think I have found an ideal spot for a plant ("Look at all that glorious sunshine!  This plant will be covered in blooms.") - only to have the plant produce foliage but not flowers.  I have started trying to make sure that I like the plant's leaves and structure; then if I happen to get a few blooms, I feel like I got a bonus!
No comments: 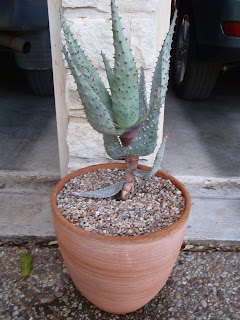 Over the last couple of years, I have really started enjoying the Aloes.  So on a recent trip to Barton Springs Nursery, I got a little crazy and purchased my first Tree Aloe (Aloe ferox).  Got it planted into a terracotta pot today.  Considering that it cannot take a freeze, and that it can grow quite large - this was definitely a wild hair for me.  But it is such a prehistoric looking creature - I just couldn't resist. 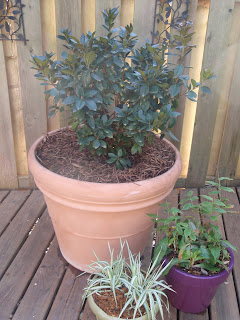 Also planted a Formosa Red Azalea (Azalea indica 'Formosa Red') in to the large pot generously provided to me by my mother-in-law.  As the plant can grow rather large, I'm hoping that it can be happy in my largest pot. 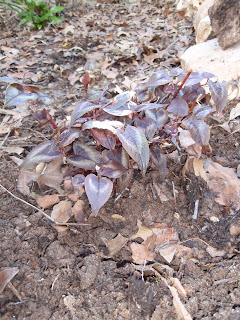 And I finally transplanted Red Dragon Knoweed (Persicaria microcephala 'Red Dragon') back into the ground (its been housed in my garage all winter).  It wasn't happy in last year's location, so its getting a chance at another spot.  I already have one that remained in the ground over the winter.  It was, of course, knocked back to its roots by the harsh weather - but I have recently noted that it is sprouting back out.
No comments: 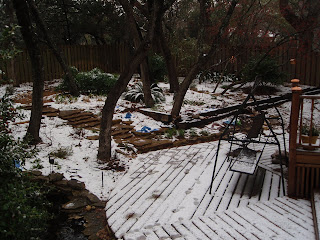 The weatherman convinced me to cover most of my new transplants - just hope it was enough protection. In Austin, it is always a balancing act between getting the plants out too early (zapped by a sudden cold snap) or too late (zapped by summer heat with insufficient root development). Here in northwest Austin, we received 1-2 inches of snow. 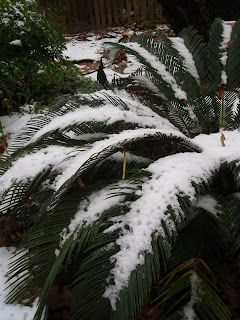 I've been babying my sagos all winter: covering them with sheets and even carefully placing a spotlight under the cover to provide a small measure of heat when temperatures dipped into the mid-20s or lower. Has worked beautifully - not a speck of damage. But not enough cover for all the plants - and with predicted temperatures reaching just a degree or two below freezing - I decided to gamble. Will have to see how that bet turns out. 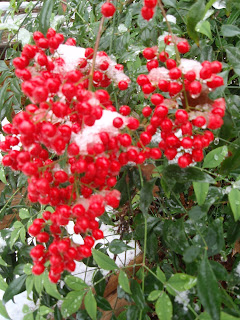 The Nandina berries put on a bright show with their light frosting of snow. 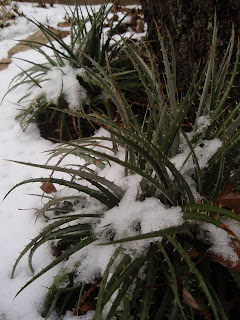 This is my first year trying Dyckias - I've planted three different flavors. The Bronze Dyckia (Dyckia fosteriana 'Bronze') was left to fend for itself. Hoping it is as tough as its thorns. 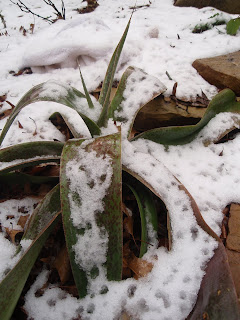 My Manfreda 'Macho Mocha' (Manfreda x Mangave 'Macho Mocha') has performed well over the past few years - actually going from one plant to four. It has weathered everything nature has thrown at it in that time - but this is likely the first significant snow. Hope it continues to thrive.

Planted Texas Bear Grass (Nolina texana) & Ribbon Grass (Phalaris arundinacea) into separate pots. Used the Bear Grass because it was a terracotta pot that I wanted to always remain outside (hate lugging about the larger heavy pots), so I wanted a plant that could stay out through winter low temperatures. Put the Ribbon Grass into a pot because I've read that it is quite invasive.

I typically use pots for plants that need more water (plastic pots), more sunlight (my deck has areas that get part sun,) can't take low temperatures (mostly succulents) or tend to be invasive (trap the little buggers).

Covered up many of my newly planted plants & aloes with sheets/blankets because of the threat of freezing precipitation - with lows only going to be right at freezing, I might not have covered much of anything if not for the chance of snow (don't think my aloes want a layer of snow or ice - even if short-lived).

Yesterday saw a pair of chickadees going in and out of my Birds Unlimited birdhouse. Never saw them carrying nesting materials or food (seems way too early for young - but what do I know). Could have popped open the roof to check - but still a little scared to do that (always thought birds would abandon a nest if bothered; and someone ripping off my roof and sticking their giant nose into my house would bother me!)

Spotted a sprout of Toad Lily (Tricyrtis lasiocarpa) popping up from where I had originally planted (had dug up and transplanted, but guess I left some behind). Will have to see how that turns out...

Both the Soap Aloe (Aloe maculata) in the front yard bed and the potted Orange Kaffir Lily (Clivia miniata) appear to be preparing flower stalks. Seems a little early but I like their enthusiasm!
No comments: 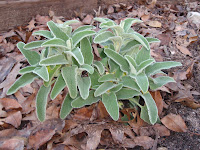 Tulips and potted Spanish Bluebell (Hyacinthoides hispanica) continue to sprout. The Chinese Indigo (Indigofera kirilowii) is showing signs of budding out - wasn't sure it had survived the 18 degree winter. 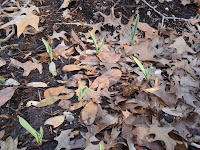 Planted Coralberry (Symphoricarpos orbiculatus) at the top of the path. Tulips are about 1-2 inches out of ground. Dyckia look a little pale - wonder if freezes or rain has damaged. Can't remember if I used cactus soil when I planted recent Cherry Coke Dyckia or my usual soil/sand/peat moss. Spanish Bluebell (Hyacinthoides hispanica) are about half inch out of pot soil.
No comments:

Planted Reifler's Dwarf Viburnum (Viburnum obovatum 'Reifler Dwarf') after breaking a hole through the limestone rock layer. Also planted Forsythia Sage (Salvia madrensis). Both planted in backyard at top of path where some dappled sun might penetrate.
No comments: 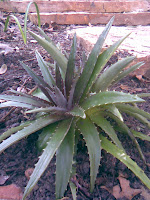 Finally stuck two of my transplanted Rock Rose (Pavonia lasiopetala sp?) into the ground - one near the pond and another near the original Aucuba. Both are offspring of the original Rock Rose that I had dug up and placed into a pot earlier this winter (as it did not seem to be getting enough sun at the top of the path). Also transplanted ~5 of the pink rain lilies around the pond Rock Rose (hoping the pink on pink will look snazzy). Planted the entire flat of seedlings I have been raising since fall from wild white rain lilies (my first ever seed gathering). Also planted a Dyckia 'Cherry Coke' near the top of the path (this will be my first year of experimenting with Dyckias)
No comments: