The Rain Lilies have been sporadically and surprisingly sending up the occasional single blossom as our drought has stretched longer and longer.  Then overnight on Wednesday (6/22), we finally got some rain.  Temperatures are quickly climbing back towards triple digits and the drought wasn't even fazed, but the Rain Lilies have gratefully responded.

Of the two varieties found in my garden, the Zephyr Lilies (Zephyranthes 'Labuffarosea') have bloomed first, sending up a small cluster of pale whitish-pink flowers.  There is also a smattering of singletons scattered about, each with its own individual flower.

The Pink Rain Lilies (Zephyranthes rosea) are also sending up flowers, but none have opened yet - though quite a few should do so soon.  Ain't rain wonderful?
7 comments:

As a follow-up to Garden Blogger's Bloom Day, Digging allows us the chance to show off the leafy aspects of our gardens.  With our ongoing drought, plants start the morning looking somewhat perky, and end the day looking pretty wilted.

One potted plant in my garden that demands a bit more water is this pass-along Coleus from Robin at Getting Grounded.  I was able to over-winter the plant and it is now back to its former glory.  I love the combination of green and maroon splashed about throughout its foliage. 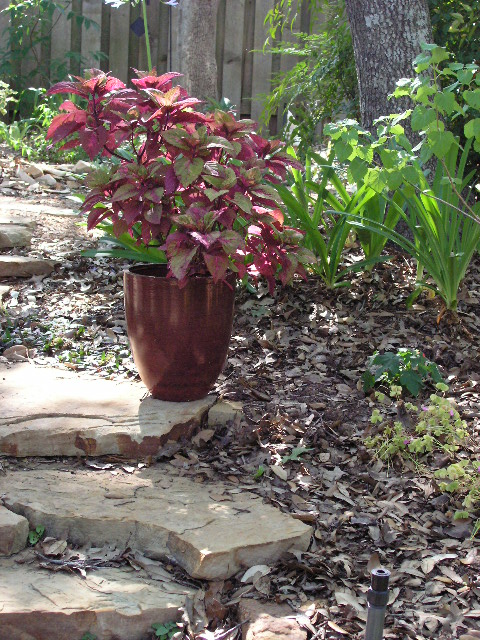 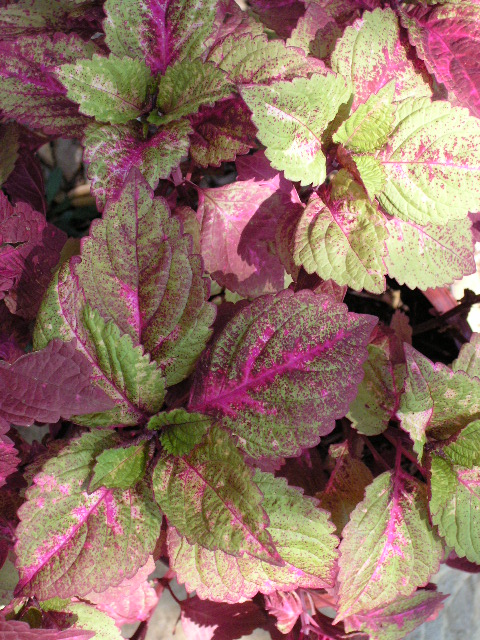 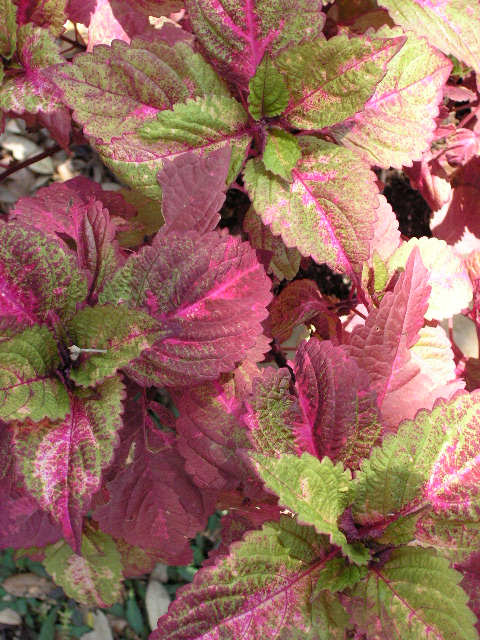 The colors blend together and no two leafs show the same pattern.  Though green and maroon are the primary colors, their combination leads to additional flavors of pink and beige. 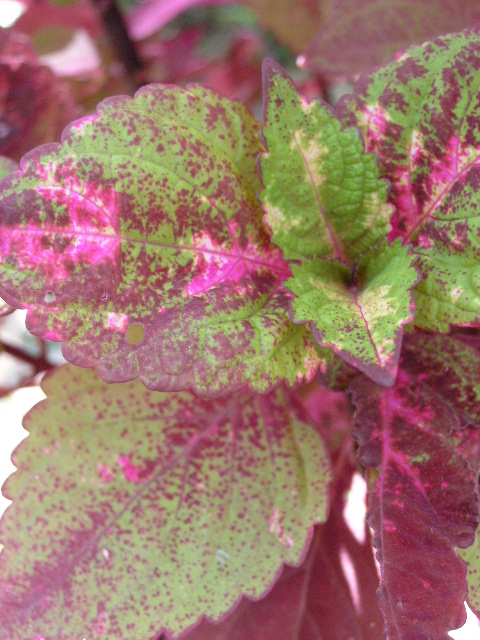 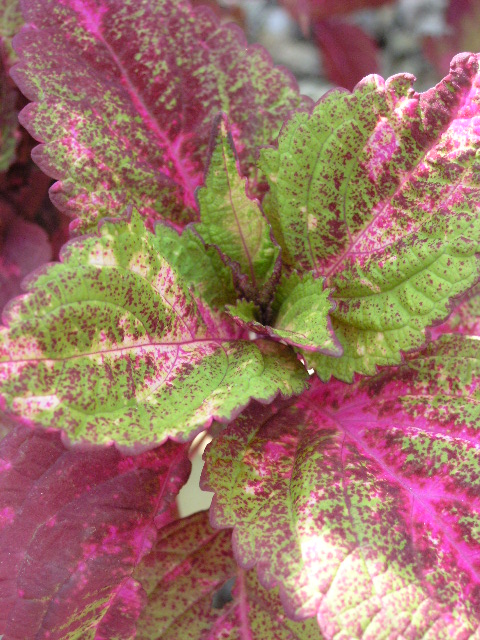 As the sun sets, it peeks through the upper canopy and highlights the Coleus from behind, lighting up the maroon undersides of the upturned leaves. 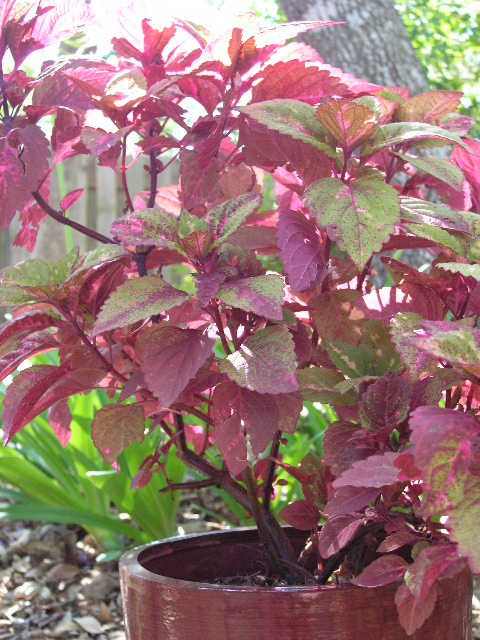 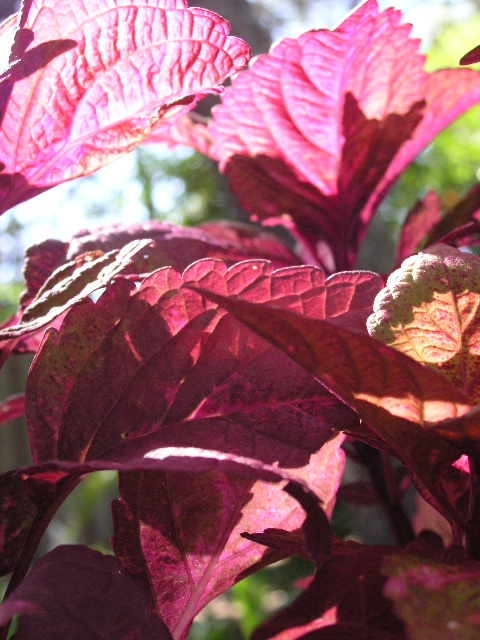 I'm unsure as to the variety name of the plant, but it has certainly been a star performer in my garden. 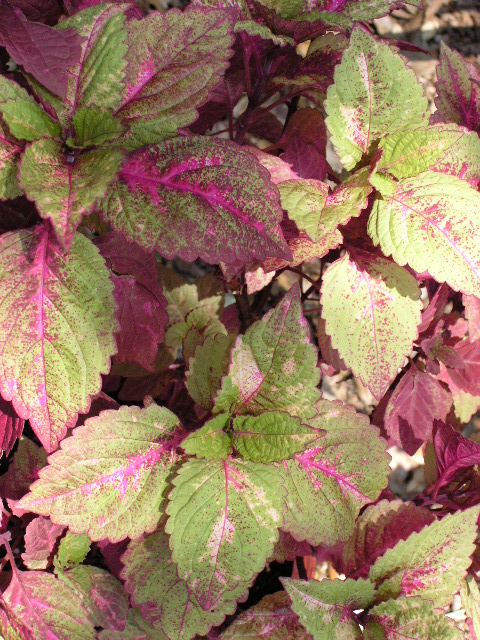 Be sure to visit the Digging blog to see the foliar shows found in other gardens.
9 comments:

Every month, on the fifteenth, May Dream Gardens invites us to share our gardens flowers.  As the drought continues, shady blooms are far and few between.  Its not unusual for there to be few flowers for my garden at this time of the year, but the growing number of 100+ degree days has certainly had an even more drastic dampening effect. 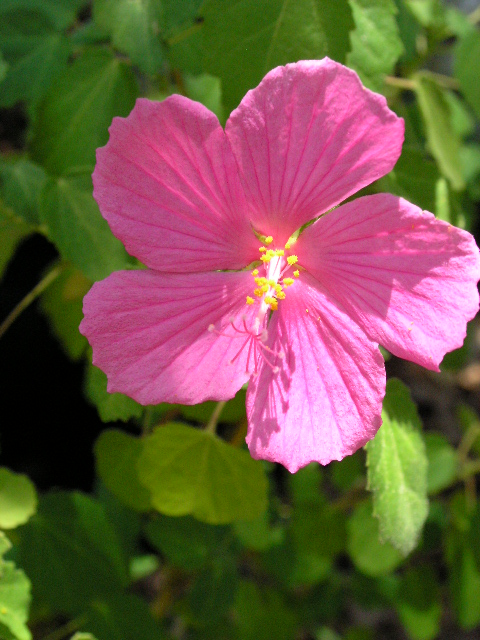 An aquatic plant that rises out of the pond, the Aztec Arrowhead (Sagittaria montevidensis) isn't bothered by our ongoing drought and heat.  Flower stalks rise up, sprout, then fall away - only to be replaced by another. 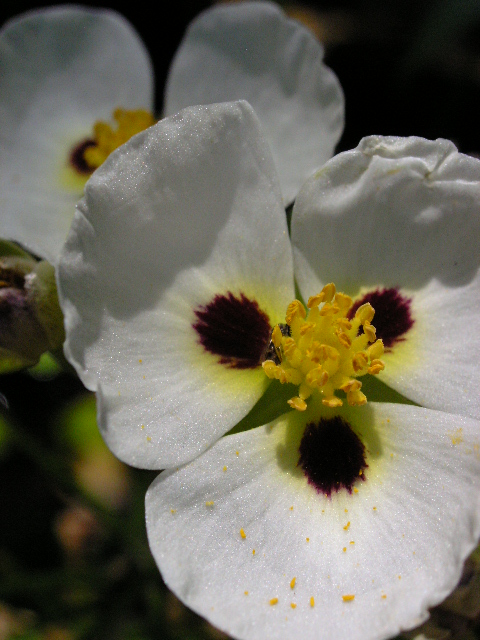 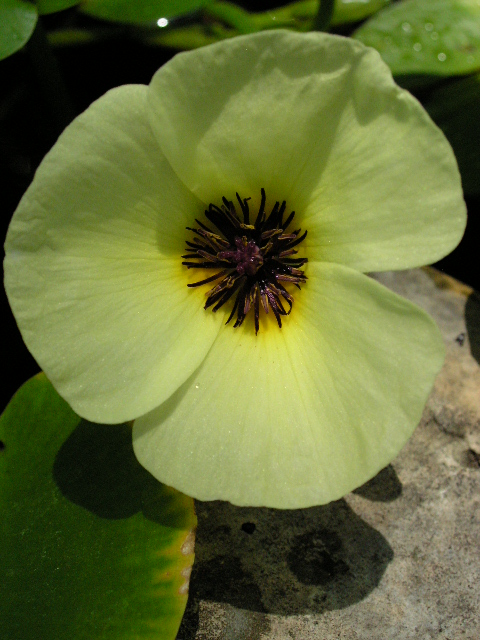 Quite surprising with our drought, but I discovered a single bloom on my scattered Zephyr Rain Lilies (Zephyranthes 'Labuffarosea').  There has certainly been no sudden change in temperature or moisture - nor even a a thickening of cloud cover.  So not sure what inspired the bloom, but enjoyed it nonetheless (though would really like to see it after a rain shower!). 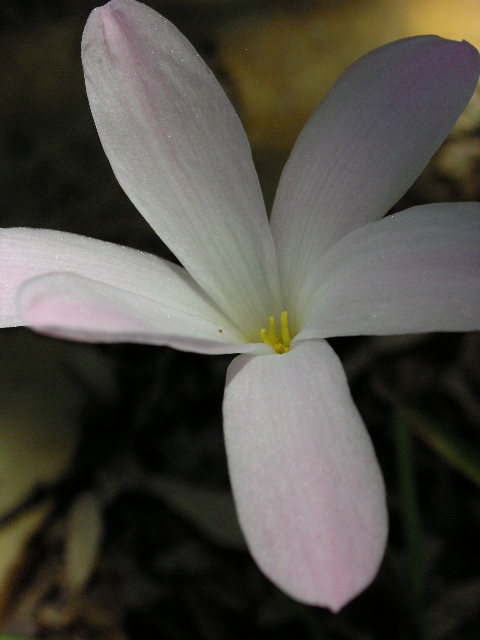 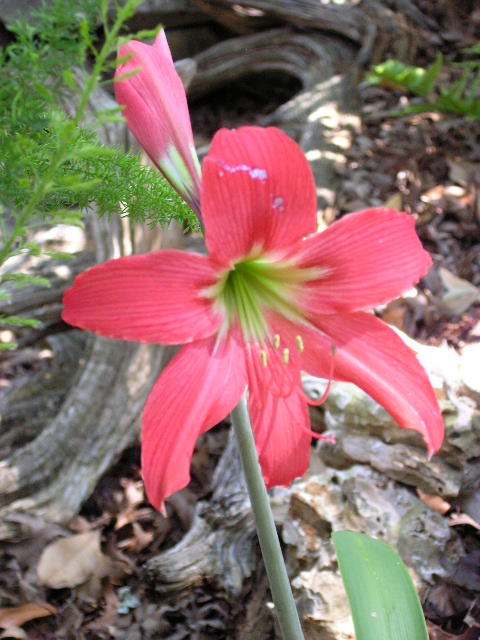 
This is the first summer for the two Pale Pavonia (Pavonia hastata) in my garden.  Winter knocked one back to roots from which it is slowly recovering; while the other was damaged but has been able to produce a few of its white blooms. 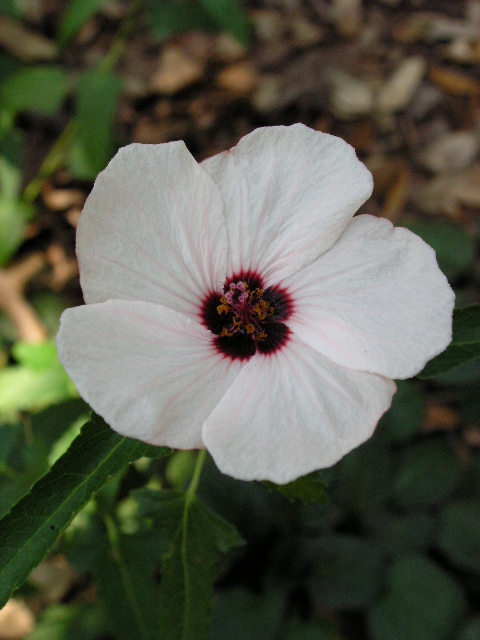 It must be happy as the Haworthia attenuata 'variegata' is producing its first bloom stalks.   All three are long and sprawling with several white blossoms alternating down their length. 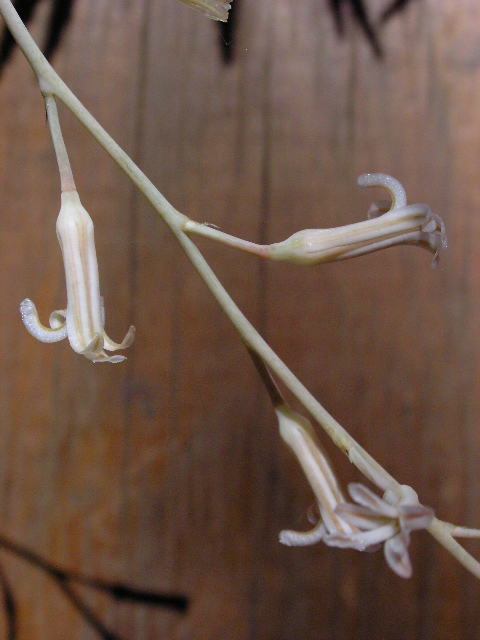 Four of the Moth Orchids (Phalaenopsis sp.) are still going strong.  The blooms have now lasted into their third month. 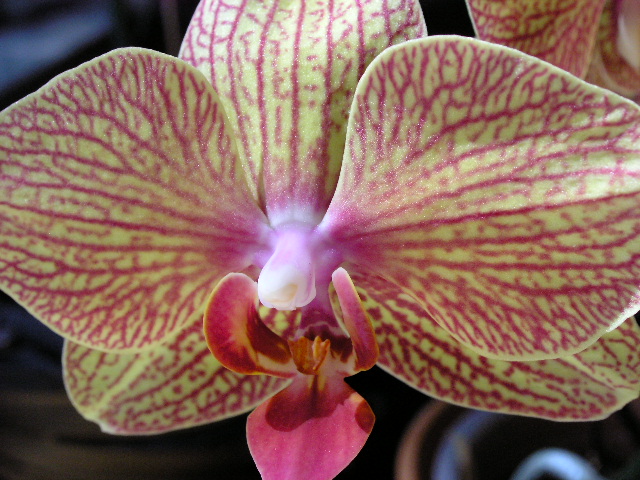 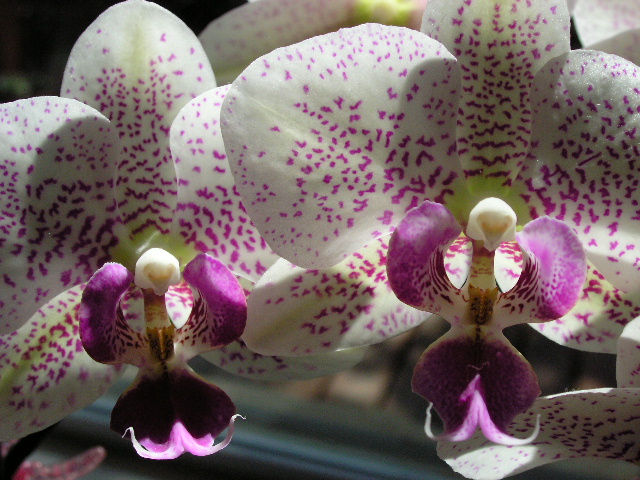 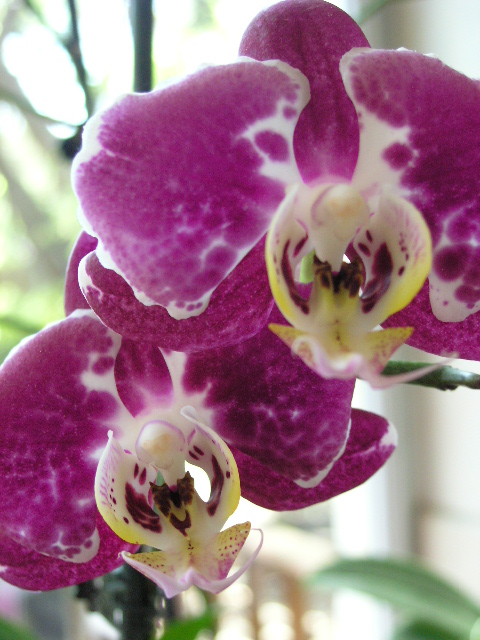 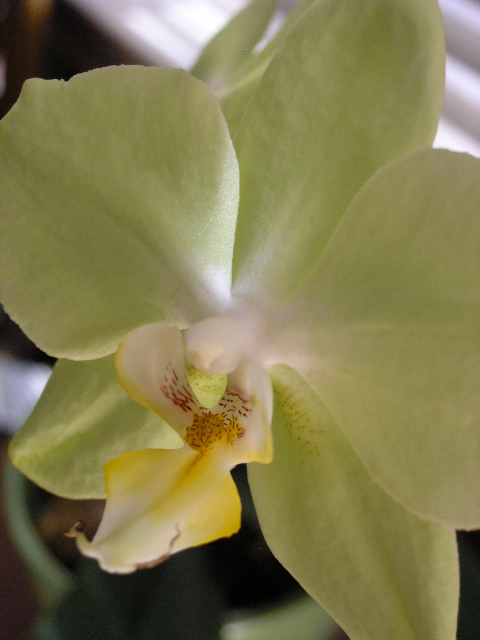 Be sure to visit May Dream Gardens and see what is blooming in other gardens.
14 comments:

Back in mid-March, I attached my new Tillandsia ionantha 'Ron' (along with others) to a piece of driftwood.  They have been sitting outside in the shade, receiving a weekly sprinkler dowsing and the occasional splash from the hose.


But recently, it has begun to put on considerable red coloration.  Relying on online documentation (as Tillandsias are new to me), a change in coloration should be a precursor to blooming and subsequent pup production.


Will be quite interesting to see how this develops. 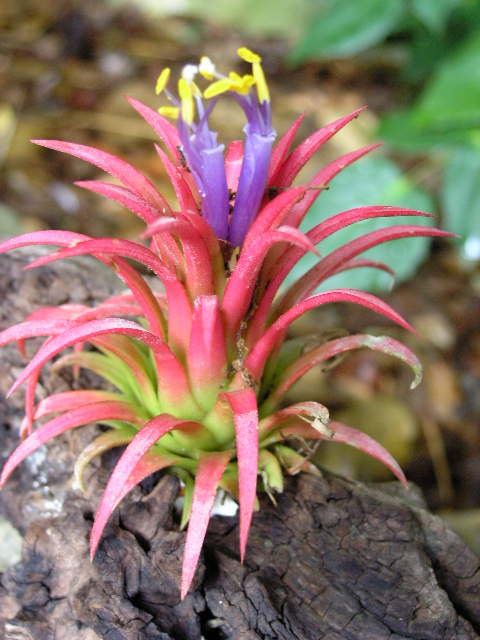 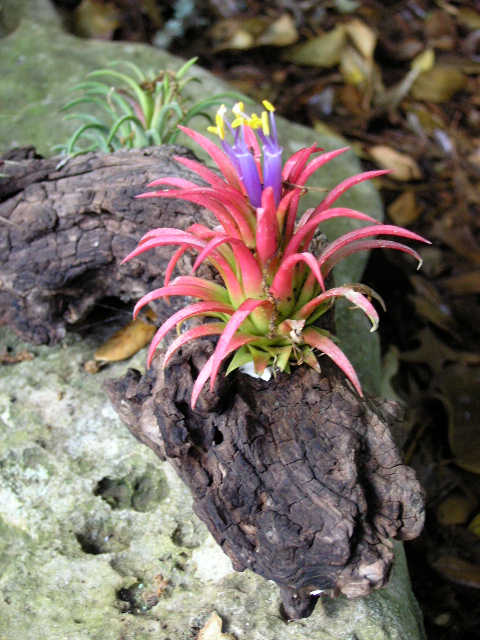 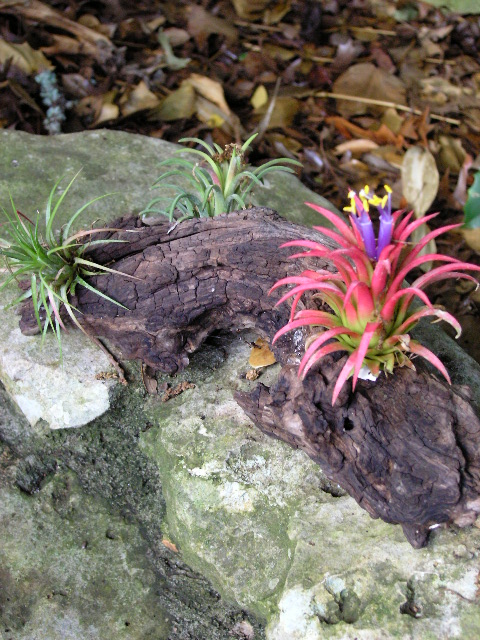 If true to form, it should pup afterwards - forming a small clump on that end of the wood.  Wouldn't that be something!
13 comments:

My Pink Rain Lilies (Zephyranthes rosea) might be a bit confused.  Hot, dry conditions continue with nary a hint of even the chance for a shower.  No sudden deepening of the shade as a heavy cloud drifts into the area; no surprising temperature drop heralding at least a tease from a moisture-laden summer thunderhead. 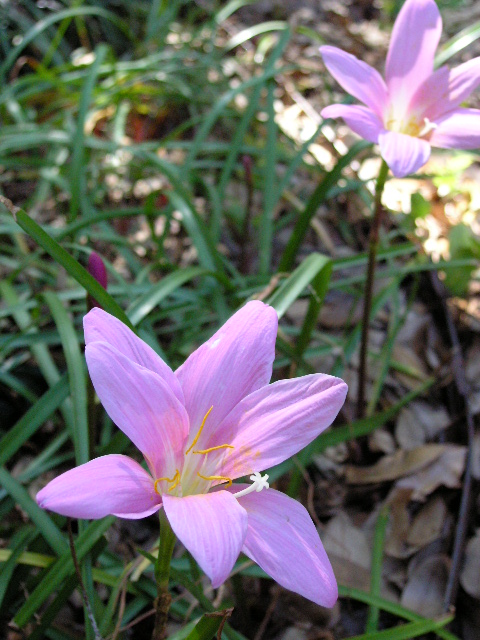 But up pop a few pink Rain Lily blooms.  Perhaps confusion.  Perhaps a plea to the heavens.  Perhaps a tease: "You wanna see more, then cry me some tears."
No comments: